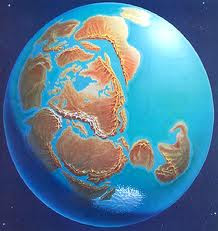 Spinning in the velvety blackness of deep space is a wondrous blue planet known as FaBo2. On first glance, it looks a lot like Earth. But the second glance informs you that the familiar continents of Earth are missing. There are no super sized continents. The Poles are not as large and have moved slightly. It looks like Earth from a long time ago.
As the stories become folk lore on the planet, geographical features are named in honour of each week's winners. So if you're ever on FaBo2, make sure you visit!

Week 1
The THOMPSON SWAMP is a lovely place to visit if you want to catch blood sucking insects, get terrible diseases and be an inhabitant's lunch. However it is one of the few places where dream bubbles can be found. Warning: Tread very carefully!

Week 2
MORATTI MOUNTAIN is a toweringly craggy peak sticking out of the vast Piano Plains like a thumbtack, waiting for an unsuspecting passerby to step on it. As the only unconquered mountain left on FaBo2, it attracts climbers from all over the planet, providing the main source of income for local hotels, mountain guides and undertakers.

ILLING POND, located high in the frozen tundra of Sighbaria, is renowned for its magical healing properties. One sip of its crystal clear water can cure everything from baldness to uncontrollable farting, nightmare-tosis to imaginitus. Unfortunately, because of the region's perpetual winter, the waters of Illing Pond are frozen solid. Even gloomstone-tipped drills can't break through.

Week 3
ILLING LAKE is a large freshwater lake near a range of mountains. Sometimes it is mistaken by inhabitants as Illing Pond...which is rather silly and shows everyone that they do not understand the meaning of 'frozen solid' and 'lets go sailing....'

Week 4
KERR HILL is at the base of Mount Songi. Kerr Hill is an important lookout. Many FaBo inhabitants make the trek to the hill to stand at the top and gaze with wonder at the very high, very dangerous, Mount Songi.

Within the MORATTI MOUNTAINS an active volcano has appeared. This volcano appeared so suddenly FaBo inhabitants think it could be magic or have some sort of mysterious Force....rumours of storm troopers have been discounted. However several  people in red shirts have been seen climbing the slope.

Week 5
RITCHIE BASE is the most popular of the hang-outs at the South Pole although the heating is always up the kybosh and local explorers and yetis have quaintly nicknamed the barracks 'the fridge.'


Week 6
The CAROLINE CAVES are largely unexplored. Strange noises have been heard coming from deep underground. Some say it's the mating call of a particularly vicious, man-eating fish species that lurks in the underground rivers. Others say it's the ghosts of lost, long-dead explorers crying out to be rescued. The truth is that nobody is brave enough to try to find out.


Week 7
The town of ILLINGTON sits on the edge of the great tussock plain. It is the place where sapphire hunters outfit themselves for the torturous trek ahead as they search for fame and fortune.... Unfortunately they mostly end up in Matthew's gulch...dead. The tussock plains are not for the faint hearted or the foolhardy.


MORATTI DAM is the largest dam on planet Fabo.
Constructed entirely of green Lego blocks, it towers over a hundred metres high at the southern end of Illing Lake and serves no useful purpose whatsoever, but is a major tourist attraction for the area.
Week 9
The ARABELLIALIS GALAXY is distinctive in the night sky because the stars form the shape of a banana - actually a chopped banana in custard. It's fairly murky up there, but it's best seen from very dark places where there are neither bright city lights nor clouds of methane gas created by hairy moonstock.


Week 10
A vast tunnel system underneath the surface of Planet FaBo begins at a place called JACKSON FORKS, where one tunnel takes you to the breeding grounds of the sucker punch spider (this is a one-way, unrefundable trip), and the other is a popular adventure tourism site, with horizontal bungy-jumping and disco balls.


Week 11
A strange mis-shaped giant rock known as the FIRST FOOT stands at the entrance to Dew Moon Bay. From a distance with one eye closed, it looks like a box of popcorn and a glass  of milk. No one knows where it came from but scratched into the rock are three names - BRUNO, MATILDA and EMMA.

Buried deep beneath the Gooderham desert on the FaBo2 High Plateau lie the  remains of Glynn village, fabled home of the bloodthirsty Sansome-ites.  Nobody knows why the village was abandoned centuries ago, or why the inhabitants built a huge Coliseum  in the middle their tiny village. Archaeologists  estimate the Coliseum could seat over a million people. Which is indeed strange when, at its height, the population of Glynn  was about 73. Some people believe Glynn was the birthplace of the ancient game of Spartonin, and was destroyed when a herd of phoenixes escaped. Others claim the weird game of Floatamot was played there, and a bad-loser genie buried the village. Nobody will ever know for sure, because  the sands of the Gooderham desert are so toxic, even writing about them can kill yo……


Grand Finale
In Central Square on Paradise Island, there is a 12-metre high granite statue of a  a wiry-haired clone. Engraved in her left foot are the initials 'BB.' The clone has a bottle of disinfectant in one hand. The clone child next to her is smiling and holding the hand of a human child. The plaque's title is the CAROLINE CONSTITUTION. It was built at the time of the writing of a new foundation document, which gave new rights to clones, and acknowledged their significant role in the history of Planet FaBo.

This is the biggie. The final chapter.

The final PRIZE will feature something uniquely random from all of the children's writers in our team, and a place on the Planet FaBo map. You've honed your skills on all of the other genres. It's time to do it one last time.

Situation: Out of all of the characters that have appeared on Planet FaBo, someone or something (possibly a crowd of them) has had enough of having only a sliver of power. They don't want to live where they live, eat what they eat or do what others want them to do.

And they make a decision, a decision that could change everything on Planet FaBo. There's about to be an uprising.

Someone is going to get hurt.

Kyle Mewburn and Donovan Bixley have a funny new series out soon for boys...Check out the video. Northwood, a new book by Brian Falkner is out soon. Melinda Szymanik has a new picture book just out, The House That Went To Sea. Kathy White has been invited to the Prime Minister's Awards for Literary Achievement in Wellington.